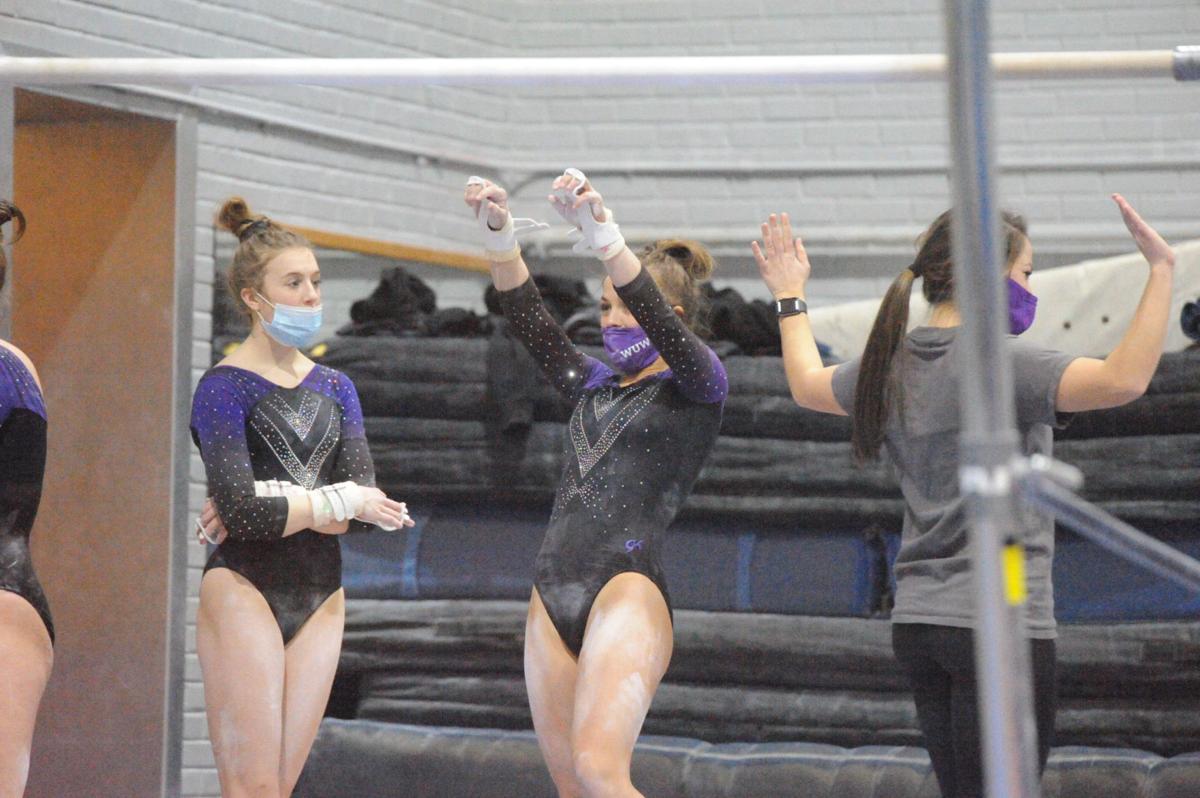 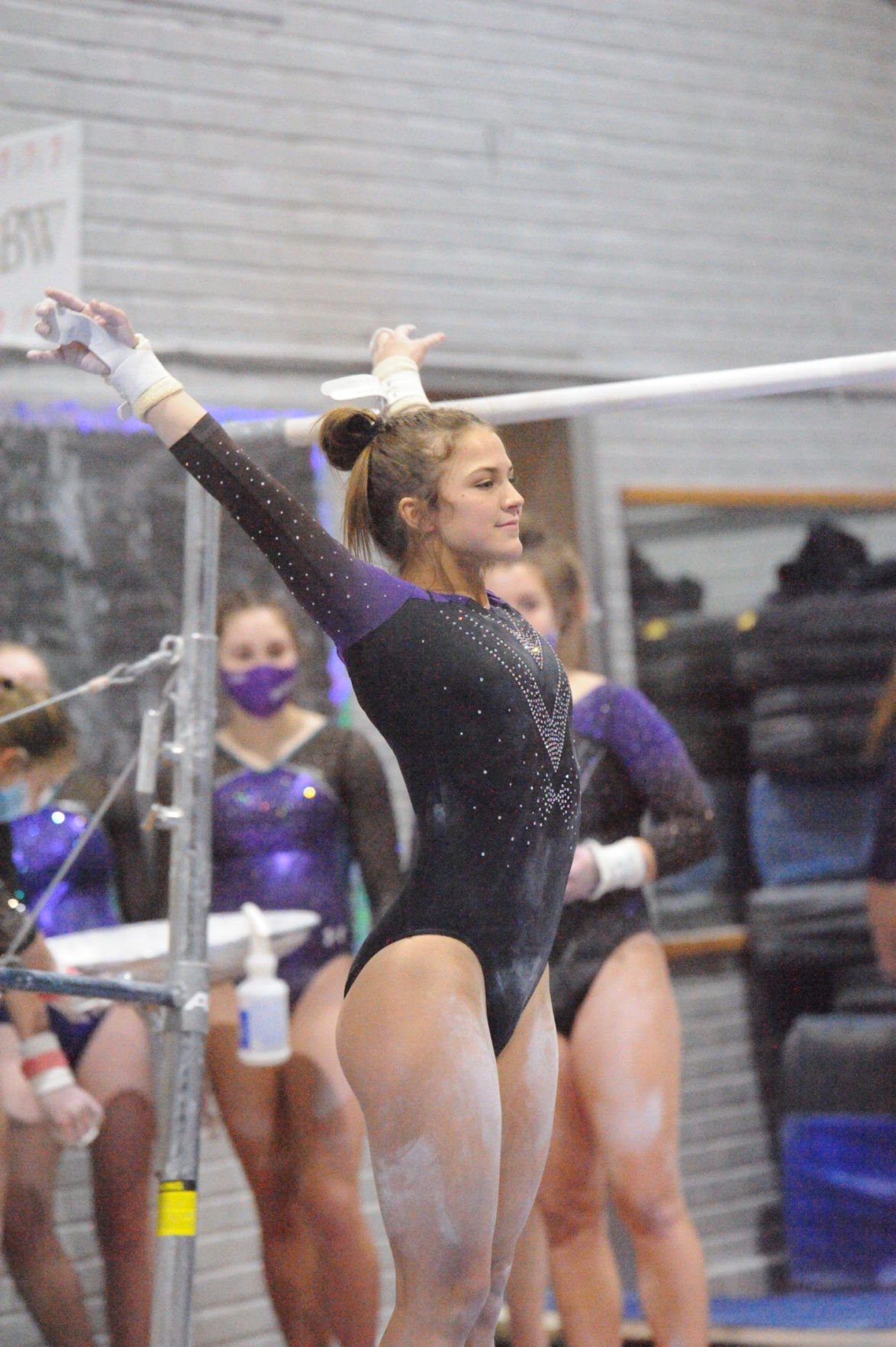 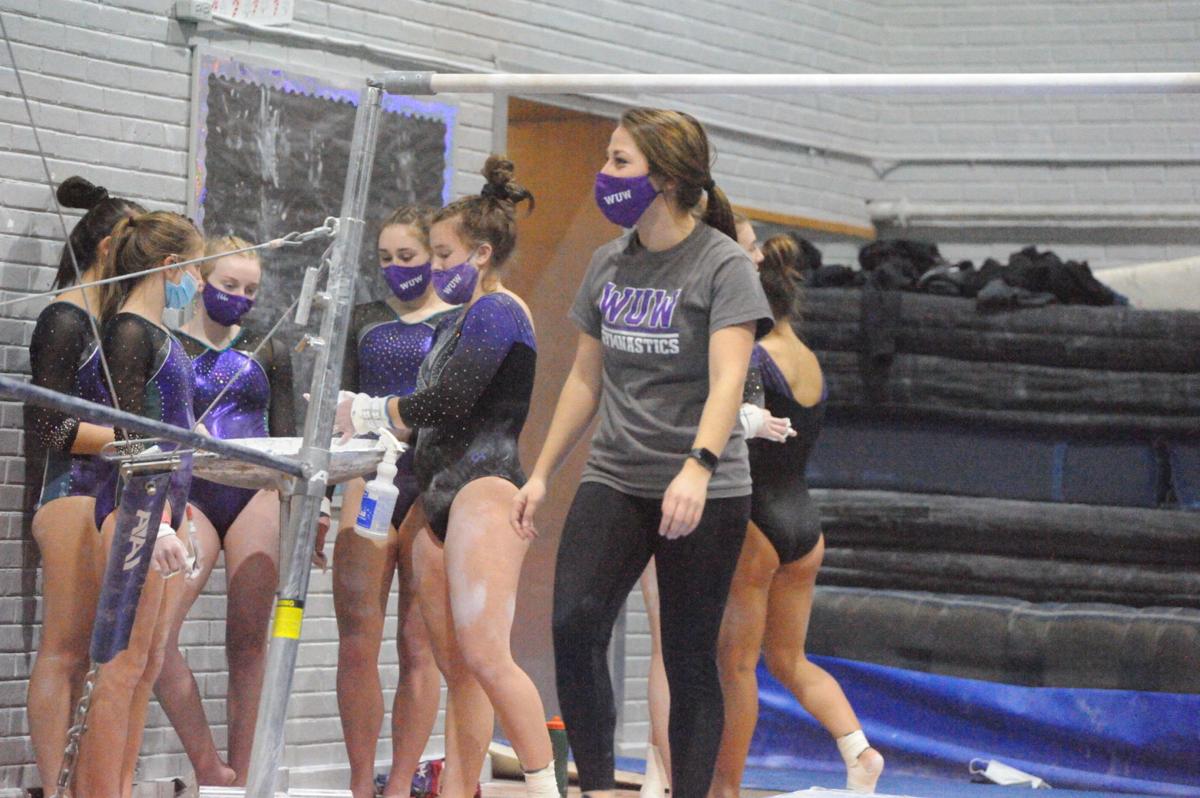 Wilmot Co-op gymnastics coach Jordin Miller works with her team during a triangular Friday at Karcher Middle School in Burlington. 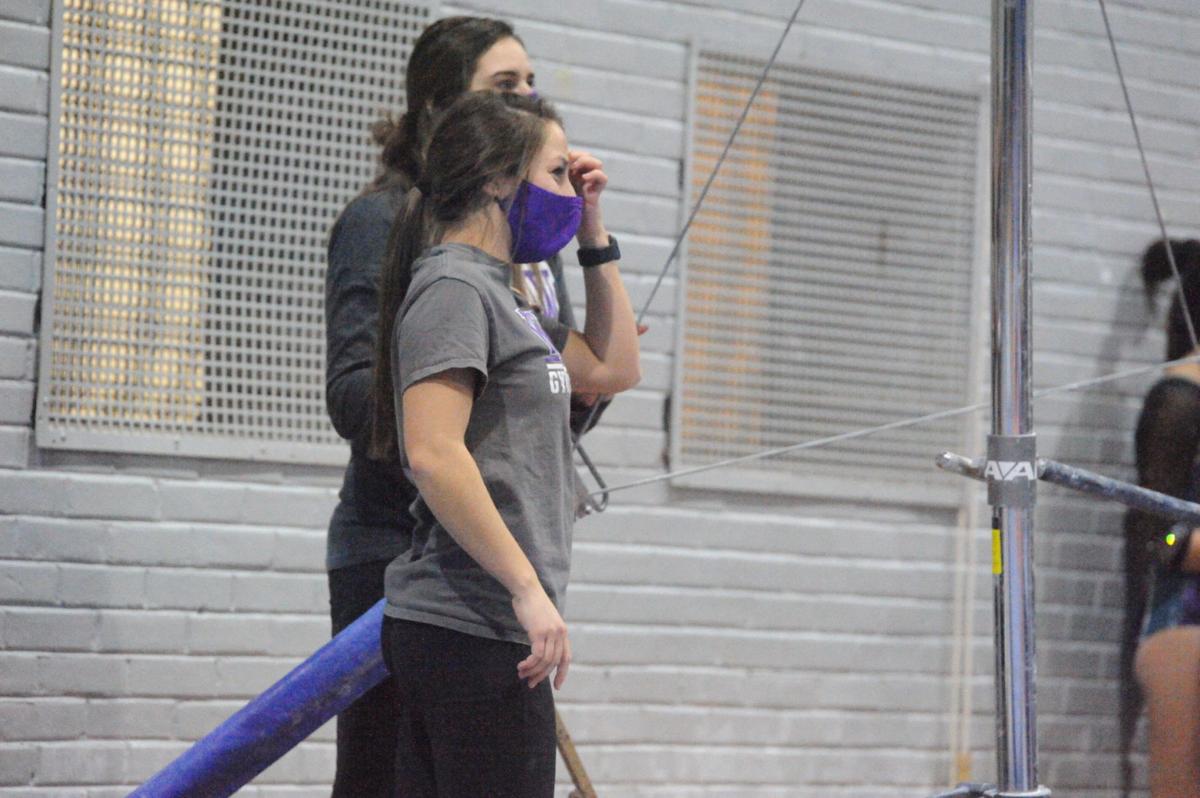 BURLINGTON — Back in early 2000, believe it or not, the Karcher Middle School “old gym,” or the original main basketball gym for Burlington High School, housed physical education classes.

Fly back in the time machine decades before the millennium, and this small space the size of maybe a modern large weight room was home to the Burlington varsity basketball programs.

A balcony overlooking the action has two rows, each with 10 aluminum folding chairs, and the only other seating is a handful of the same folding chairs on the ground level, literally inches from the uneven bars, floor, balance beam and vault equipment for gymnastics.

It’s one of the smallest varsity sports venues in the tri-county area of Kenosha, Racine and Walworth counties, yet somehow it’s still the home gym of the Burlington/Badger Combined and Wilmot Co-op — which includes Union Grove and Williams Bay — gymnastics teams.

And the connection runs even deeper.

Not only did they dominate the SLC, they won a WIAA Division-1 sectional that year, which was hosted at Burlington.

And on Friday night, the girls — who still practice together every day after school at Karcher — competed against each other at Karcher, along with Mukwonago/Kettle Moraine Combined.

Familiar with each other

If they would’ve done nothing, they would’ve had to pick between competing in the WIAA Individual or Team State events — they couldn’t do both.

So the girls agreed to split up, allowing their student-athletes the chance for the most possible competition.

Unfortunately, it was only the beginning of major changes for the two programs.

Karcher Middle School will be demolished this summer, and a brand-new facility will be erected alongside it.

However, Chart fears the teams won’t have a home venue to host gymnastics practices or meets next school year.

Burlington High School has demonstrated that it’s capable of hosting gymnastics, but practice times would be dictated by other sports, and with the uncertain future surrounding the COVID-19 pandemic, it’s unclear whether guidelines to limit people indoors will change anytime soon.

Wilmot Co-op won Friday’s triangular with a team score of 146.575, but no fans — not even parents — were allowed.

“It’s not fun with no fans, but we had good energy tonight,” Chart said Friday night after Wilmot Co-op won the three-team event.

“No parents. But they’ll get to come to conference and sectionals. Mukwonago had to go up there (to the balcony seating), which is normally where parents are, because our locker space is so small. It’s frustrating, but the girls are getting a season, so they’ll take that. Parents and fans can live stream.”

Chart, meanwhile, lauded her girls, who scored a 138.325 to place second. Mukwonago/Kettle Moraine Combined was third with a 132.375.

Wilmot Co-op was led by dominant performance on the balance beam and in the floor exercise, scoring a 37.325 and a 37.475, respectively.

Leez Patterson, a newcomer from Williams Bay, scored a 9.55 to win beam.

Murphy, who Miller said is a great athlete that can do just about anything — including hit a golf ball extremely well — won the all-around with a 37.725. Murphy placed third in the all-around at state last year. Pye was second Friday with a 37.075 and Bronson landed fourth with a 36.050.

Murphy’s captivating floor routine earned a 9.725, the highest score of the night.

Wylde Chupich, a Lake Geneva Badger newcomer, also sizzled for Burlington/Badger Combined. She scored a 36.575, good enough for third overall in the all-around.

Miller, who was an assistant for two years under Chart, said she was excited about her squad’s high score.

Team scores higher than 145 usually aren’t seen until later in the season, and they’re usually high enough to either win or contend for a state title.

“This is our second meet, and we travel with Burlington everywhere,” Miller said. “We share practice space and busing, and we rent this space as a co-op.

“It’s a very high score for this early. At state, we got a 144 last year. I’m not going to say this is going to last forever, but I like how the girls are getting this confidence boost.”

“We also have a new girl, Leeza, who’s a great asset to our team,” Miller said. “We’re slowly trying to get her vault back and hopefully bars.”

Also, Pye had a big day. She nailed her series on the beam and excelled on floor, Miller added.

“After this year, we won’t have Karcher, so hopefully Wilmot will lend us some space,” Miller said. “Next year, whatever gym we decide to use, we’re still all going to be together, because we share the equipment.

“Not just one co-op is going to buy all new equipment. It’s so expensive.”

Chart says it will take a collaborative effort among both Wilmot and Burlington high schools to make next year’s potentially difficult transition as smooth as possible.

Elkhorn, which has a $26 million taxpayer-approved athletic facility and new gymnastics equipment, could be a last-ditch option.

“When Burlington High School was quarantined, we had to go to Elkhorn High School and Walworth County Gymnastics Center (WCGC) to practice. We practiced from 7 to 9 at night,” Chart said.

“It’s not super late if you live close, but Union Grove students were driving 45 minutes at 9 on a school night. I think that would be detrimental to our team, and we would lose a lot of numbers. And parents don’t want to drive that far late on a school night.”

The goal remains the same for both teams — getting to play and making it to state.

Miller, a Wheatland native and Central graduate, and Acosta, of Woodstock, Ill., are both teachers at Wilmot, and they are confident things will run smoothly. Both Wilmot Athletic Director Herm Christiansen and Burlington AD Eric Plitzuweit will do everything in their power to give the student-athletes a season.

“I hope we’re able to have state, and the schools that should be at state, at state,” Miller concluded. “And staying healthy, I just hope we don’t have to quarantine any of our girls, because it will be a juggling act.”

‘I hugged him, and I told him I loved him': How Aaron Rodgers said goodbye to Ted Thompson

“He was a really, really humble man, and I definitely appreciated that humility,” Aaron Rodgers said of Ted Thompson, the former Packers GM who died on Wednesday.

The NFL announced that 7,500 health care workers vaccinated for the coronavirus will be given free tickets to next month's Super Bowl in Tampa.

Wilmot Co-op gymnastics coach Jordin Miller works with her team during a triangular Friday at Karcher Middle School in Burlington.