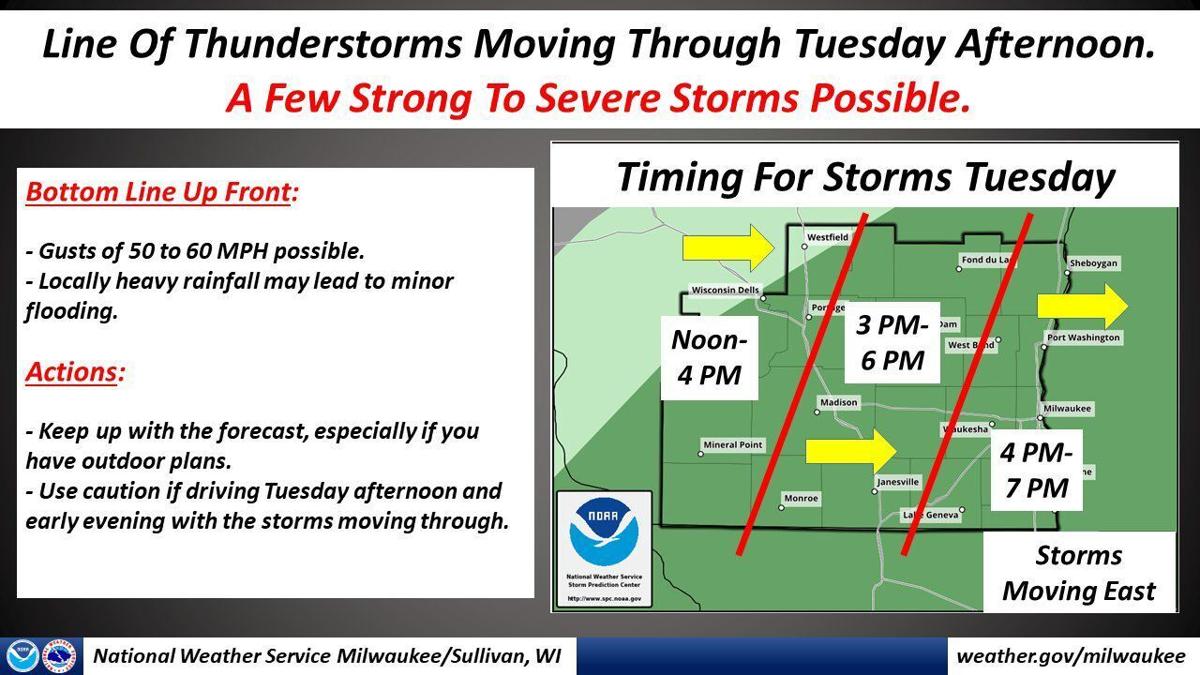 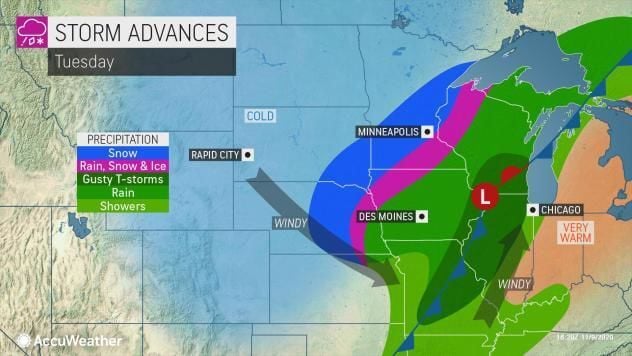 A brief tornado is possible, damaging winds are the main threat, and heavy rain could fall as a record-setting November-style heat wave ends with a stormy Tuesday across southern Wisconsin, according to forecasters.

A line of strong to severe storms will move east across southern Wisconsin this afternoon and early evening, with the primary period for severe weather from 2-7 p.m., said Mark Gehring, National Weather Service lead forecaster.

Southeast and east-central Wisconsin is under a wind advisory Tuesday afternoon and night as south winds shift out of the west and gust to 45 to 50 miles per hour.

To the north and west, snow will fall, rather than rain, as cold air that has been building over the West moves east, AccuWeather said.

"While places like the Twin Cities have already picked up over 9 inches of snow this season, temperatures at times have been running 15 to 30 degrees above average since Election Day," said AccuWeather Meteorologist Matt Benz. "This sudden return to winter will certainly be a shock to the system after such a warm start to the month.”

In Madison on Tuesday, 1 to 2 inches of rain is possible with the showers and storms, the high should be near 63, and west winds will blow at 5 to 15 miles per hour before turning out of the east in the afternoon and gusting as high as 30 mph, the Weather Service said.

The chance for showers is 70% early overnight, with possible totals of less than a tenth of an inch, as the low falls to around 32 and winds gust to 40 mph.

Wednesday’s forecast features partly sunny skies gradually becoming sunny, with a high near 45 and southwest winds at 5 to 15 mph.

Skies over Madison should be mostly sunny Thursday, sunny Friday, mostly cloudy Saturday, partly sunny Sunday, and mostly sunny Monday, with highs near 51, 40, 44, 52 and 45, and lows Wednesday night through Sunday night around 31, 27, 28, 38 and 34.

From the archives: Deadly tornado leveled Barneveld in 1984

A 39-year-old Texas teacher is facing murder charges after sheriff's deputies say she shot her teenage son during their morning drive to school.

Ask the Weather Guys: Why are cold snaps in autumn so short-lived?

Very often cold snaps in the autumn are very short-lived affecting usually one or two nights at most.

Ask the Weather Guys: How does weather affect fall colors?

Ask the Weather Guys: What is the Farmer’s Almanac forecast for winter?

The Farmers’ Almanac does not share how it makes its forecast, so it cannot be judged scientifically.

Ask the Weather Guys: What were the significant U.S. weather events of summer 2020?

Q: What were the significant U.S. weather events of summer 2020?

If the Trump campaign requests a Wisconsin recount, what happens next?

Counties must complete their process of verifying the election results before the campaign can request a recount.

The mandatory testing comes about 10 days after Halloween weekend, a period in which at least some students violated public health orders.

States with the most extreme weather 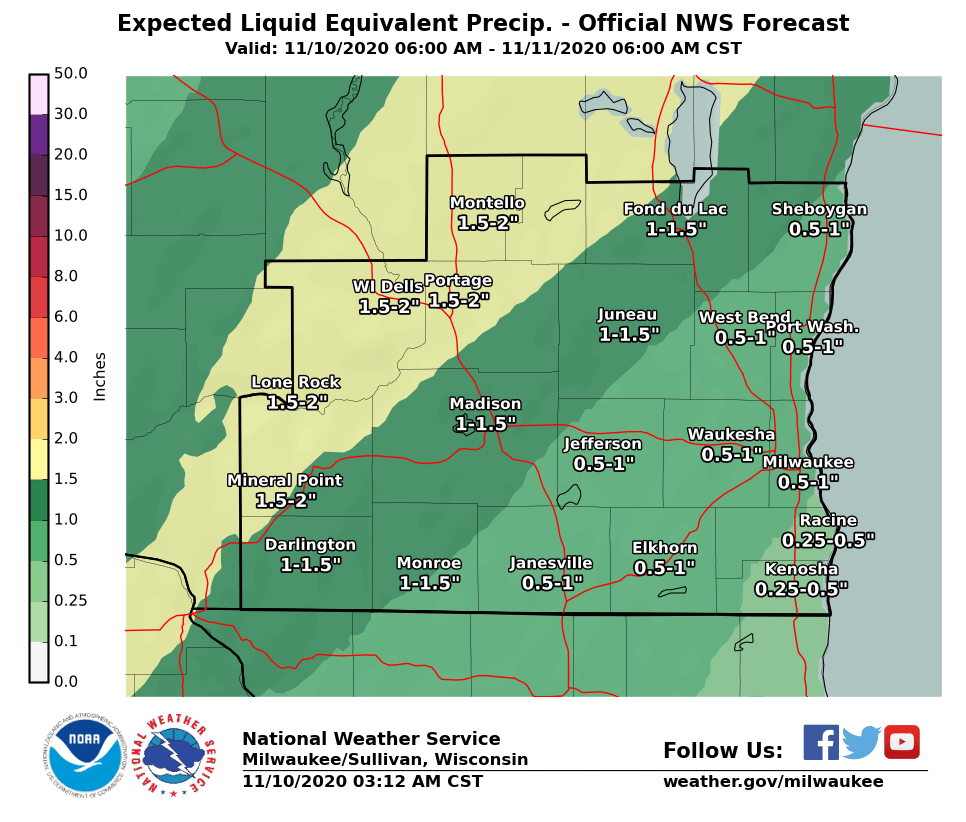 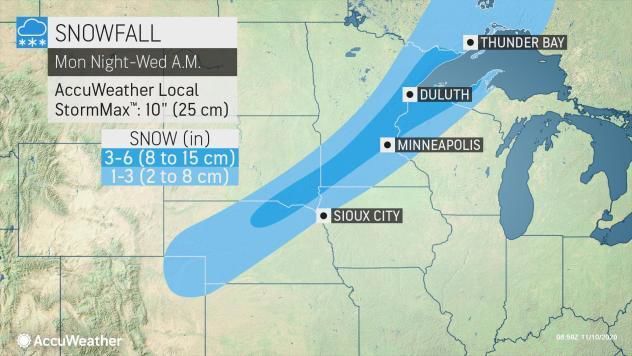 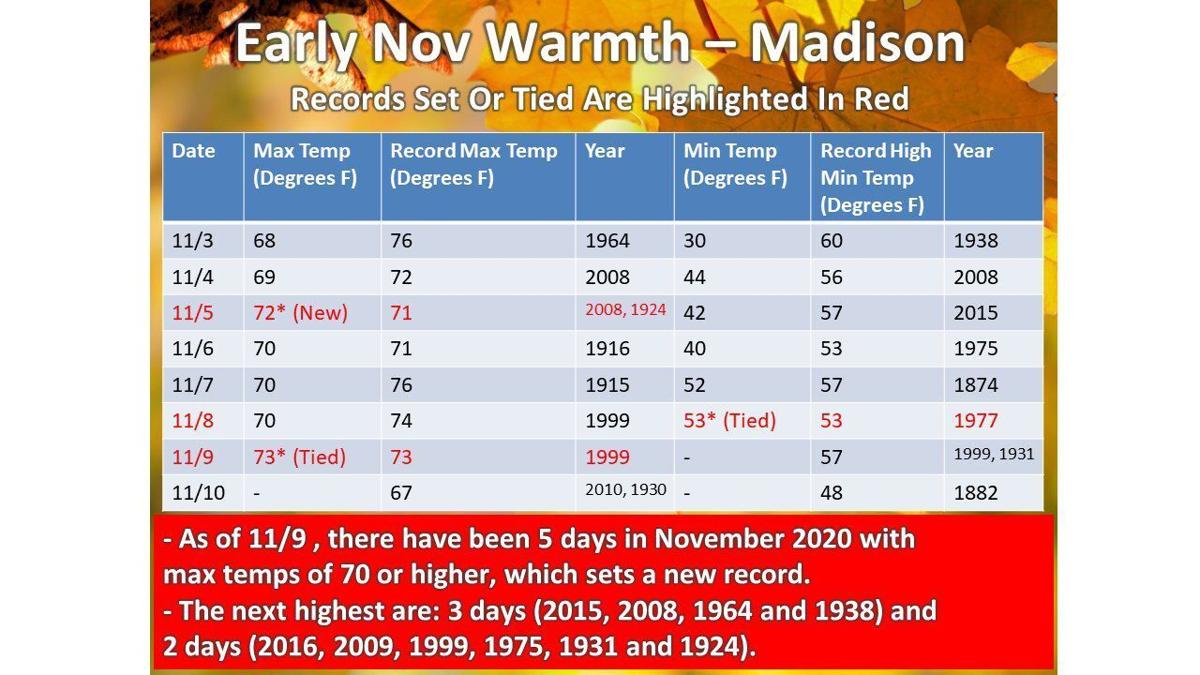